February 10, 2012
We celebrated Bronze's birthday the weekend before his actual birthday at West Edmonton Mall Galaxyland Amusement Park.  Bronze's friends are there as well as his uncles, grandparents, Ninang, and his little cousins.  Last year Bronze is intimidated by the bigger rides and stuck to the kiddy rides.  Now, I was shocked to see that Bronze went on the intermediate rides.  Bronze and his friends went on "The Autosled" roller coaster so many times that I lost count.  He wanted out of the "Flying Galeon" a few seconds into the ride.  I made him though it out but as we were leaving the ride he screamed, "Again! Again!".  I felt sick after that ride and thats the end of that ride.


First I wanted to make Bronze a SpongeBob Square Pants cake but Bronze wanted a plant vs zombie cake.  I tried making a zombie but failed.  Bronze's cake is marble filled with chocolate buttercream and then covered in vanilla buttercream.  All the acessories on the cake are handmade using edible fondant.
To create the watery effect in Spongebob's pond I spread light blue tinted piping gel on the area and streaked  a darker shade of blue to imitate ripples in the water.  The rocks are made with cake crumb/frosting mixture. 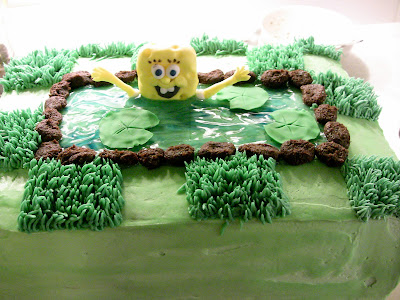 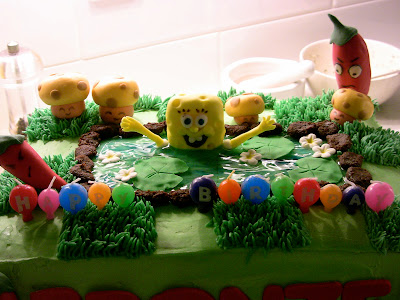 Popular posts from this blog

May 30, 2015
This is how I made my Ube (purple yam) Minion cupcake..  Enjoy! Come see how I made it in this youtube video.  Don't forget to subscribe for more updates! Used Wilton tip 1M to create the rose pattern on the cupcake.  Start pipping from middle cupcake and out. To create the eyes...  You will need 3 different sizes of round cookie cutter (3", 2.5, 1 inches, white fondant, grey fondant (goggle frame), light brown fondant (iris), and black fondant, large ball tool, and piping gel.  Cut out a 3" circle out of grey and white fondant.  Set aside in large ziplock bag.  Cut out a 2.5" circle in the middle of the grey circle.  This will be the frames for the minions goggles. With a small brush apply a small amount of water along the perimeter of the white circle.  Lay down the grey frames on top of the white circle.  Using a ball tool (See pic bellow) make an indent on the bottom centre of the white circle.  Place the brown 1" circle in the di
10 comments
Read more

December 08, 2013
This is my favourite.  I put together 37 cupcakes to create this cute hello Kitty cake. Buttercream Recipe: 1 cup butter at room temperature 4 cups sifted icing sugar 1 tablespoon vanilla extract 3 tablespoon milk The amount of icing sugar, vanilla extract, and milk can be modified to suit your taste.  Beat the butter until smooth then add the rest of the ingredients beat everything on medium speed on electric beater until smooth.  Enjoy! Hello Kitty in her turtle.  Baby its cold out here. -31 with -40 windchill. Pipped roses on individual cupcakes using Wilton tip #1M.  Cover gaps with more icing. This is how I arranged the ube cupcakes.  31 all together.
12 comments
Read more

July 02, 2012
I made this Elmo cake for my cousin's daughter, Jayla who turned 3 a few weeks ago for her Sesame Street Themed birthday party.  The cake was a marble chiffon cake crumb coated and filled with chocolate buttercream.  For Elmo's fur I used Wilton's "grass tip" to pipe out red vanilla buttercream.  Elmo's eyes and nose are made with fondant which I secured using toothpicks. Used Wilton Doll Cake Mould for the body. Sports ball cake pan for Elmo's head. Inserted straw for structure support. Filled each layer with chocolate buttercream. Normally I trim the tops of cake to create an even surface here I kept the dome and turned it into Elmo's slightly open mouth.  Make sure the top half of the circle is smaller than the bottom half.   Important note:  Elmo's unique qualities are his big wide upward smile, his football shaped head, and the top half of his head is smaller than the bottom.  Its hard to achieve
6 comments
Read more

CAROUSEL
Edmonton, Alberta, Canada
Hey there, I'm Carousel. I am mostly known for my Mocha Chiffon Cakes. People often refer to me as Cake Lady. I love serving the world by sharing recipes I collected over the years. The things that I am passionate in life is chocolate chips and Kdrama. I serve people who struggle with baking, and people who need help with building their custom cakes and cupcakes. When I am not working on cakes and developing recipes I am outside working on my tomato and squash garden, and taking long walks with my hubby, kids and our tortoise babies. IF you are dying to hear more here are a few things you might not know about me: I met my husband in high school and together we had 2 teenagers. I love to learn new languages, my favorite dish is Palabok.